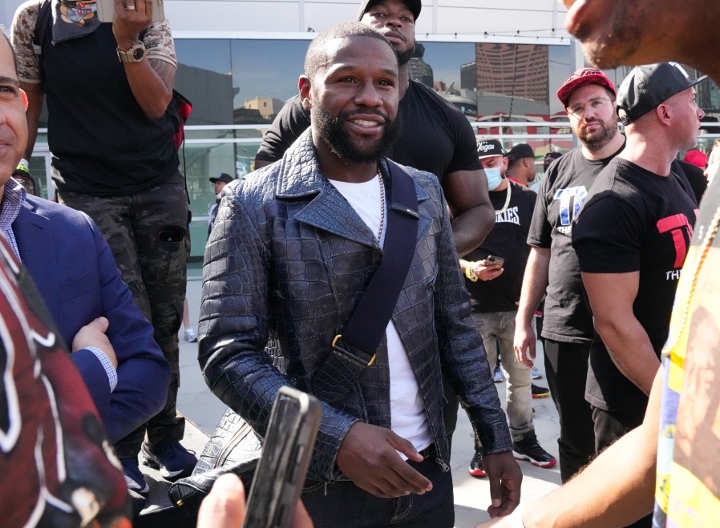 Floyd Mayweather will be gloving up once again.

The 44-year-old Hall of Fame boxer announced in a press conference that he will be participating in an exhibition bout on a helipad at the Burj Al Arab Jumeirah hotel in Dubai on Feb. 20.

“February 20th, we haven’t chosen an opponent yet, but I look forward to it and hopefully we give you guys something to see,” Mayweather said.

The frontrunner to face the boxing great apparently is Dubai-based, 19-year-old YouTube star Money Kicks (né Rashed Belhasa), according to Mayweather himself.

Money Kicks is the son of billionaire Saif Belhasa.

“I spoke with [my advisors] about Money Kicks. We don’t really know,” Mayweather said, adding, “Money Kicks is doing big things and I like what I am seeing.”

Both sides have had discussions about a potential exhibition as early as October. Money Kicks told the Lovin Dubai Show at that time that “Talks are happening between me and Floyd Mayweather [for a bout] in the region, in Dubai.”

The announcement confirms the first event that Mayweather will be handling in Dubai. He has been hinting at ramping up his business ventures in the region for the past few months.

Mayweather, who will be 45 by the time of the exhibition, stated the event will be of an exclusive nature.

“Well, I don’t like to call what I’m doing a fight,” Mayweather said. “I like to call it a limited-edition boxing showcase. Because it’s bigger than just boxing.”

“It will be a very special crowd,” he continued. “Not too many people. So, if you get the chance to come here, you must know that you are very special.”

Although he officially retired from boxing in 2017, after his blockbuster against Conor McGregor, Mayweather (50-0, 27 KOs) has since then participated in several high-profile exhibition bouts.

Most recently, Mayweather engaged YouTube star Logan Paul in an eight-round bout on June 6 at the Hard Rock Stadium in Miami Gardens, Florida. The fight went the distance, but as it was an exhibition, a winner was not announced.  Mayweather’s guarantee was reportedly $10 million, including 50% of the pay-per-view profits; the bout, which was broadcasted on Showtime Pay-Per-View, reportedly generated upwards of $1 million buys.

In 2018, Mayweather flew to Tokyo to take on MMA star Tenshin Nasukawa in a three-round exhibition bout. Mayweather stopped Nasukawa in the opening round, and reportedly earned $88 million.