We’re now two months into the women’s college basketball season as we head into 2022, which means we’re two months away from the most exciting time of the year…March Madness.

Let’s dive into some midseason superlatives to tip off the new year:

Team that lived up to the hype 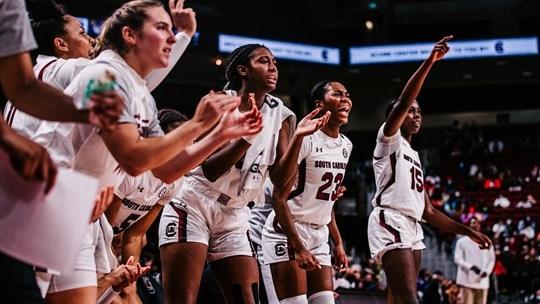 Once South Carolina coach Dawn Staley brought back 100% of her Final Four roster, plus brought in the No. 1 recruiting class in the country and Syracuse transfer Kamilla Cardoso…we all called it. South Carolina was primed and ready to take home its second national title in 2022, being equipped with tremendous depth, talent, experience and leadership.

But did we predict this team would start 12-0 with such a vigorous non-conference schedule? Honestly, i did not see this coming. South Carolina was the clear SEC favorite, but outside of the conference the gamecocks were tasked with one of the most toughest schedules in the nation. South Carolina has answered the challenge with an impressive 6-0 record against top 25 opponents, including heavyweights NC State, UConn and Stanford. No other team, but South Carolina, can flex this type of dominance in the 2021-22 season.

So yes, even with a surprising first loss to Missouri to open SEC play and end the calendar year, South Carolina has still lived up to the hype and exceeded its expectations. 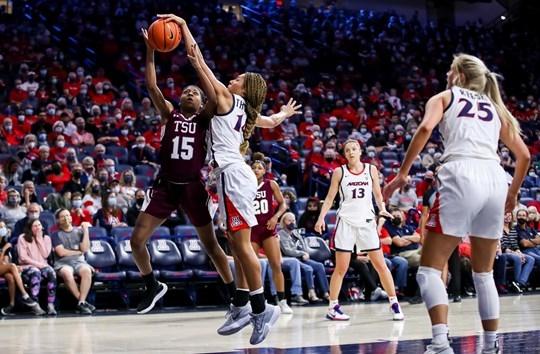 So far, Arizona has been the biggest surprise team of the season with a strong 10-0 record with a notable win over Louisville.

Yes, this is a team coming off of a championship appearance run, but the Wildcats are proving they are still contenders without Aari McDonald. We have seen each player step up individually to produce a successful unit, especially on defense. Arizona is the No. 8 scoring defense in the nation, holding opponents to 49.7 points per game. It’s also worthy to note that Arizona is ranked in the top 30 in the nation in steals.

Arizona was the No. 22 team in the AP’s preseason poll. Since then, the Wildcats have taken a major leap to No. 4 in the Top 25 poll. In my preseason bracket, I had Arizona listed as a six seed, but as we approach midseason form, they clearly belong on the No. 1 line, as of right now.

I have high expectations that head coach Adia Barnes’ team will be strong in conference play and will make another deep run in March. Unfortunately, we haven’t seen the Wildcats since Dec. 17 due to COVID-19 protocols and tracing. The Wildcats will resume action on Jan. 7 against Washington State to start Pac-12 play.

Team on the rise 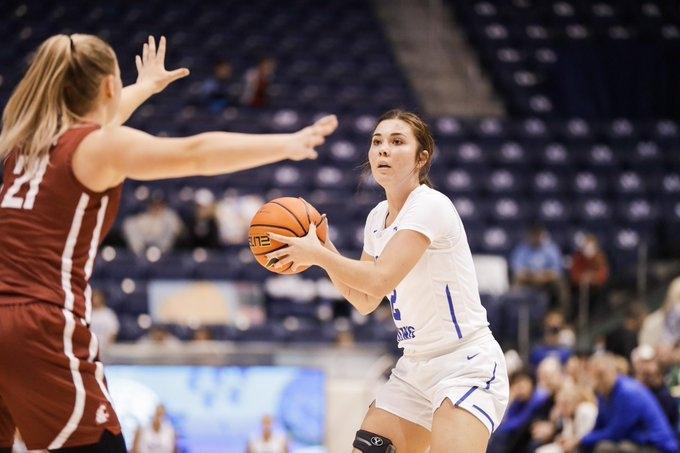 The Cougars brought back all of their starters from last season’s team that took down Rutgers and nearly Arizona in the 2021 NCAA tournament. Fast forward to this season, BYU has continued its momentum with its experienced squad as the No. 18 team in the AP Top 25 poll to end the year.

So far, the Cougars have an impressive 10-1 record with notable ranked wins over Florida State and West Virginia. The back-to-back upsets earned BYU a spot in the AP.

BYU opened its season with a nine-game winning streak, and its only loss is to Oklahoma in overtime. The Cougars are led by sophomore guard Shaylee Gonzales, who’s ranked No. 33 in the nation in points (17.6 ppg) and Lauren Gustin, who’s the second-best rebounder in the country (12.7 rpg).

Fair warning…watch out for this team! They are the West Coast Conference favorites entering conference play and will be a tough out in March.

Spartans, give it up for @niaclouden for:
1. Breaking a school record
2. Being third overall player in the B1G to score 50 points
3. Scoring the most points in the NCAA this season so far

We’ve seen tons of impressive individual and collective performances this season, but so far, Michigan State’s Nia Clouden has had the greatest performance by far. Clouden scored an impressive 50 points against FGCU on Dec. 21. This performance broke Michigan State’s single-game scoring record and put her in the Big Ten history book as the third overall player in the conference to score 50 points. Last year, we saw Michigan’s Naz Hillmon put up the same numbers.

What was impressive about the senior guard’s 50 point game was that Clouden only hit one 3 to achieve the milestone. The rest of the points came from 60 percent shooting and 12-for-15 from the charity stripe. Clouden attacked the basket while using her mid-range ability to knock down the majority of her shots. Despite the one point loss, Clouden helped the Spartans force double overtime to finish the game 85-84. Yes, Clouden scored more than half of the Spartans’ points.

Clouden is currently No. 7 in the nation in scoring, averaging 21.8 points per game. This was the first 50-point game we’ve seen, so far, this season. It may not be the last with the dominant scoring threats we have this year.

UNDEFEATED: Here are the remaining undefeated women’s basketball teams in the 2021-22 season

National Player of the Year (so far) 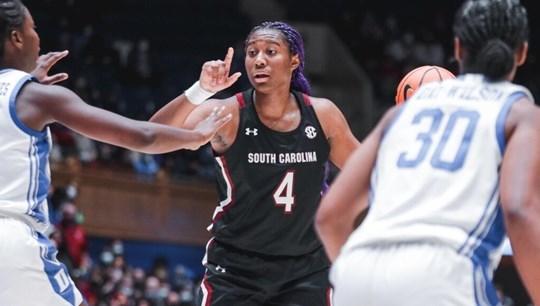 So far, the National Player of the Year is South Carolina’s Aliyah Boston without a doubt.

The back-to-back Lisa Leslie Center of the Year is a force in the paint and has improved all areas of her game. Yes, that includes beyond the arc. The 6-5 junior forward has even added a 3-point shot to her arsenal to stretch the floor. Boston has already created havoc with her inside game, but now her defenders have to worry about guarding her out on the perimeter. She wasn’t afraid to pull it from the 3, but now she’s becoming more efficient shooting 35 percent with seven triples so far.

Boston is the main focal point on every team’s scouting report. Despite the double-team in the interior, the junior forward is still giving South Carolina high production on offense, averaging 17 points a game. What’s remarkable is that Boston is getting her points in an efficient fashion. Notably against North Carolina A&T, Boston shot 13-for13 from the floor, 1-for-1 beyond the arc and 2-for-2 from the free-throw line in only 21 minutes.

The double-double machine is also grabbing 10.2 rebounds per game, which ranks her No. 21 in the nation and helps South Carolina as the No. 14 team in the nation off the glass.

But it’s not just offense and rebounding for the National Player of the Year frontrunner. Boston is a problem on defense. So far, she’s swatted away 39 shots, which puts her No. 4 in the nation in blocks. She makes her tough for opponents to score inside and gets clean looks doing so with her smart defense.

When you look at South Carolina’s flawless record, you have to put Boston up first in this conversation. She has been a key ingredient to its winning formula and continues to deliver at a high level for her team.

Aliyah Boston is putting up wild numbers for @GamecockWBB 🤯 @HighlightHER

National Freshman of the Year (so far) 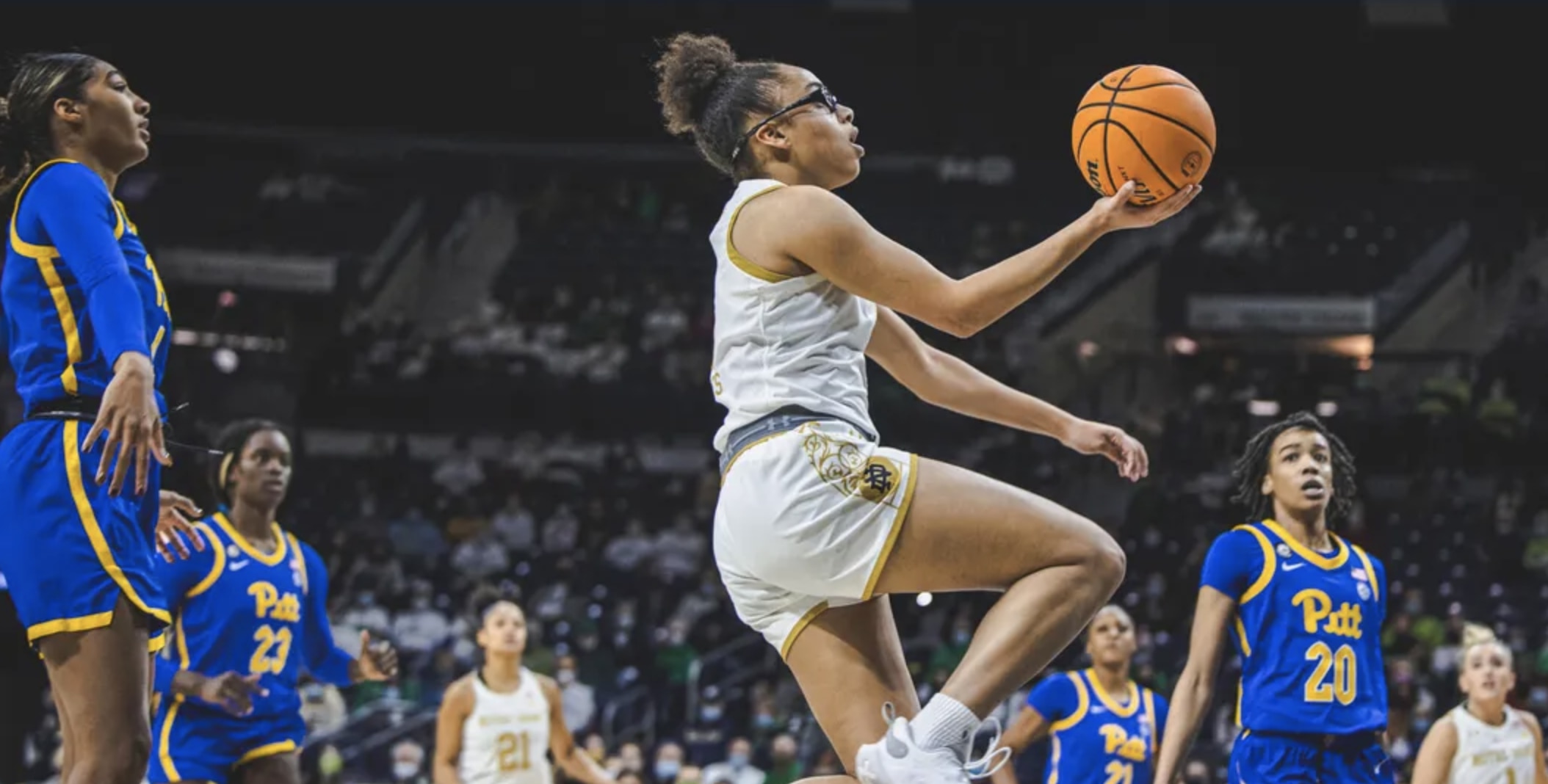 Notre Dame’s Olivia Miles has been working on her case of becoming the National Freshman of the Year, so far.  The freshman point guard is running the Irish offense full-time and has been setting her teammates up for success. Miles is currently No. 1 in the nation in assists, dishing out 101. Iowa State’s Emily Ryan is next in line recording 82 assists.

At 17-years-old, Miles had an early start to her collegiate career as the first early enrollee ever at Notre Dame during the 2020-21 season, but she was able to keep her freshman athletic eligibility for this current season. Miles came into this season with six games under her belt, and four of those were against top-5 seeds in the ACC tournament. This experience has given Miles the unwavering confidence she and this team needed as Notre Dame’s floor general.

Miles is one of the most exciting players to watch. The 5-10 guard is extremely athletic and has elite court vision…and most importantly, swag on the court with her crafty moves. She does a little bit of everything for Notre Dame. As a guard, Miles is a top-2 rebounder on this team, grabbing nearly seven boards a game. She’s also the No. 2 scorer for Notre Dame, averaging 12.6 points. She is tied in first place with five double-doubles in the ACC and top-10 in steals in the conference.

Notre Dame’s head coach Niele Ivey will have plenty of time to mold this young talent and the future is already looking bright. Miles has helped catapult Notre Dame back into the top-25 conversation as the current No. 17 team in the nation and No. 2 in the ACC with an 11-2 record. The only losses are to Georgia in overtime and at UConn. Notre Dame has picked up notable wins over DePaul, Michigan State and Oregon State.

Needless to say, Miles is a star in the making and she’s not getting talked about enough.

Missouri’s Hayley Frank and Lauren Hansen on historic upset over No. 1 South Carolina

Autumn Johnson speaks with Missouri women’s basketball’s Hayley Frank and Lauren Hansen after a thrilling upset over No. 1 South Carolina, finished off with a game winner from Lauren Hansen. Missouri handed South Carolina its first lost of the season.

NCAA.com’s Autumn Johnson awards six midseason superlatives for NCAA women’s basketball, including team that lived up to the hype, biggest surprise team, team on the rise, greatest performance, national player of the year (so far) and national freshman of the year (so far).

Missouri’s Hayley Frank and Lauren Hansen on the Tigers’ historic upset over No. 1 South Carolina

Autumn Johnson speaks with Missouri women’s basketball’s Hayley Frank and Lauren Hansen after a thrilling upset over No. 1 South Carolina, finished off with a game winner from Lauren Hansen. Missouri handed South Carolina its first lost of the season.


How Missouri women’s basketball made history and stunned No. 1 South Carolina to begin conference play | NCAA.com


2022 NCAA DI men’s and women’s basketball tournaments to be played as scheduled | NCAA.com

Louisville rises to No. 2 in women’s basketball Power 10 rankings

NCAA.com’s Autumn Johnson breaks down her Power 10 women’s college basketball rankings for Dec. 27, 2021. Louisville rose to No. 2 after beating UConn to extend its win streak to 10.