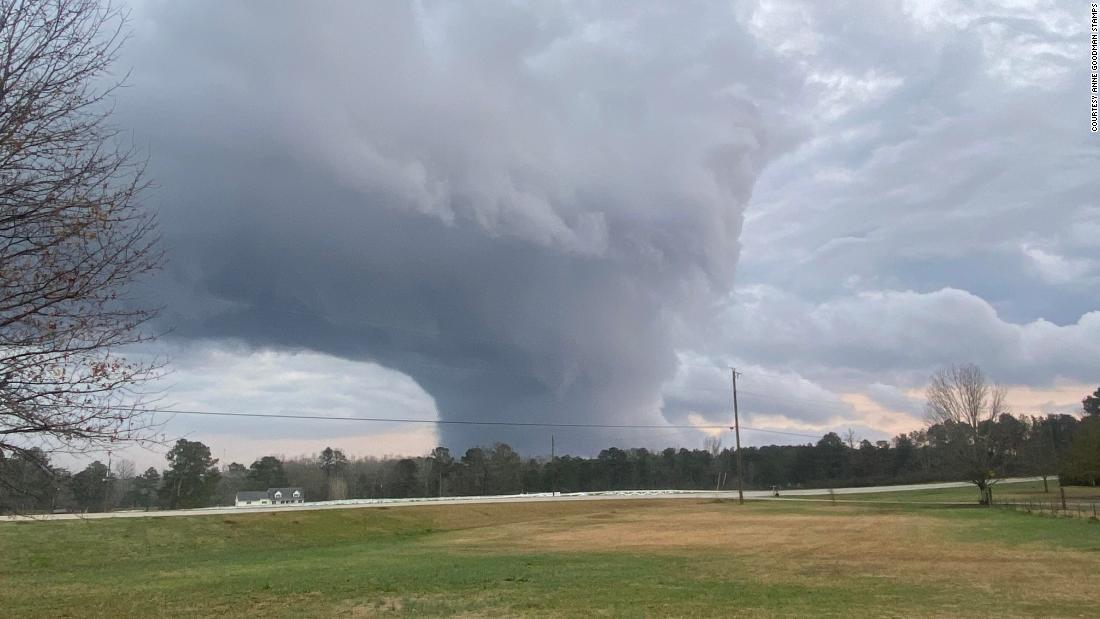 “Based on the visual and radar appearance of the storms, we do believe several of the storms Friday were a type of rotating storm, or supercell, known as a low-precipitation or LP supercell, ” Steve Nelson, Science and Operations Officer for the National Weather Service (NWS) office in Atlanta, said.

“LP supercells are more common in the High Plains region of the US,” Nelson said, and are scarcely seen in the Southeast.

When LP supercells are present, the odds of also including a tornado are even lower. Such storms are much more likely to produce very large hail.

“An LP supercell has less precipitation and based on studies, these storms can produce tornadoes, but are somewhat less likely,” Nelson said.

Nelson added precipitation descending along the back side of a rotating storm plays a key role in how tornadoes form. It’s very much a case of “Goldilocks” conditions.

“If there is too much precipitation, it can cut off the warm air going into the updraft which fuels the storm,” Nelson said. “Too little precipitation and you lose mechanisms that create rotation near the ground and potentially a tornado.”

Such storms are more challenging to see on radar than more “traditional” severe storms. Meteorologists heavily rely on radar reflectivity to monitor where storms are located.

“You need precipitation, like rain, hail, etc., in order to see how the air is moving in the atmosphere. So when there is no precipitation in the atmosphere it makes it hard to understand the movements that are occurring within a storm,” Kyle Thiem, meteorologist with the NWS office in Atlanta.

Nelson added, “without precipitation, the storm is almost impossible to detect,” which explains why Weather Service offices around the country rely on storm spotters on the ground.

“Reports from spotters and county officials in Carroll and Newton counties were extremely helpful and allowed warnings to be issued for areas in the path of the storm and other storms that had similar features,” Nelson said.

The storm in Carroll County, which includes the northwestern suburbs of Atlanta, and the one in Newton County located between Augusta and Atlanta, both had ideal atmospheric conditions for supercells to develop and form tornadoes, however they were very small in overall size.

“Because the storms were incredibly shallow, that limited the growth of the parent supercell, which is why so little precipitation was falling,” Thiem said. “Fully formed supercells have a much better ability to harness the low-level shear into the atmosphere in order to produce a tornado.”

Tornadoes themselves are not rare in Georgia, averaging 26 per year. Having one in December is not unheard of, as the Peach State averages at least two tornadoes every single month of the year.

Georgia is 5th in terms of tornado fatalities, averaging four per year, tied with Texas, Oklahoma, and Mississippi. Thankfully Friday’s storms did not cause any fatalities.

One of the main difference in Friday’s tornadoes was they were not rain-wrapped, as they often are in the Southeast. The storms and the tornadoes associated with them were highly visible.

When tornadoes are rain-wrapped, in “high precipitation” (HP) supercell storms, they are often more deadly because they are difficult to see.

HP supercells make low-level storm features such as wall clouds and tornadoes difficult to identify, the NWS office in Amarillo, Texas, where LP supercells are more common, pointed out.

By definition, LP supercells have very little if any rain associated with them, which is why it is very easy to see the wall cloud in photos from Covington, Georgia.

“Low-precipitation storms are very rare in Georgia, or in the eastern US anywhere really, because East of the Mississippi River is so much more humid on average than the Plains. But it does happen from time to time, especially in the cooler season,” said Brandon Miller, CNN Meteorologist. “Nearly 15 years ago to the day, on January 2, 2006, a similar storm with little rain and a very unremarkable presentation on radar produced an EF-3 tornado in Georgia.”

Nelson confirmed the 2006 event is the only other “formally documented” case of this type of storm occurring in Georgia.

While Friday’s tornadoes weren’t EF3’s like the one in 2006, they did cause damage.

Two separate EF1 tornadoes were confirmed on Saturday by the NWS.

The one in Newton County lasted just under 10 minutes and traveled 2.5 miles. It damaged a few homes, businesses, and a middle school. Two cars were flipped in a restaurant parking lot, and a total of six injuries were reported.

The tornado in Carroll County lasted just under 15 minutes and traveled nearly 3 miles. While there were no injuries, numerous trees were brought down, and minor building damage was reported.