Despite Liverpool slipping to a 2-2 draw at Chelsea, Virgil van Dijk believes they can still catch title favourites Man City if they drop points, as “anything can happen still.”

The Reds’ trip to Stamford Bridge was set up as a must-win for both sides, but a glut of absences for Liverpool and Chelsea threatened to affect the spectacle.

However, an enthralling 90 minutes played out in west London, with the visitors ultimately seeing a 2-0 lead drop as they were left to settle for a point.

Man City‘s comeback victory over Arsenal on Saturday pushed them 10 points ahead of Chelsea and 11 in front of Liverpool – who have a game in hand – which has convinced many they are already champions.

There remain 17 games to play, however, and 18 for Jurgen Klopp‘s side, which Van Dijk clung to as he spoke to Sky Sports after the game.

“[It is] never difficult to believe,” he insisted.

“It’s a big gap, they have the title maybe to lose at the moment, but anything can happen still.

“Unfortunately, we’ve been there, where we had a gap and we were in front then we gave it away. So anything is possible.

“We just have to get results, play good football and win games. It sounds pretty easy, but it’s tough as you saw today as well.” 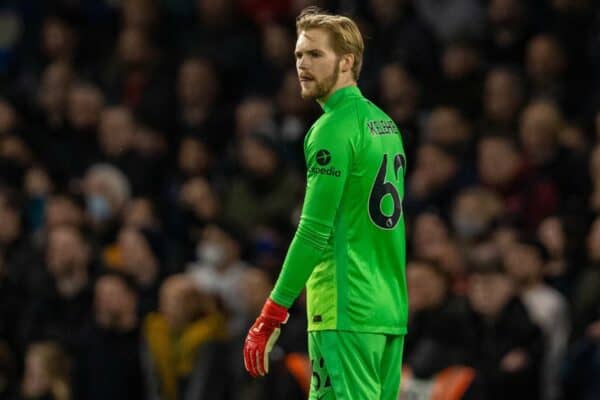 Not only were Liverpool without Klopp on Sunday, but they were also shorn of Alisson, Joel Matip and Roberto Firmino after positive COVID-19 tests.

It left Caoimhin Kelleher to step into goal, and asked about the Irishman’s performance, Van Dijk was full of praise.

“I’m quite a big fan of him! He’s a fantastic goalkeeper, he’s learning from the best in my opinion with Alisson,” the defender said.

“His presence is good, he’s confident on the ball and he’s making good saves as well. That’s good.

“We need him right now, obviously because of the Covid cases.

“Unfortunately, we conceded two, but the first one he can’t really do anything about it. We need him for the next games as well.”