Before each event, Fighters on the Rise shines a spotlight on three athletes set to compete that weekend that are, as the series name suggests, climbing the ranks in their respective divisions.

This year’s collection of fighters has run the gamut from promotional newcomers Michael Chandler and Loopy Godinez and emerging contenders Islam Makhachev and Jiri Prochazka to rookie standouts Manon Fiorot and Erin Blanchfield and unsung talents Max Griffin and Shavkat Rakhmonov, a pair of welterweights that each had tremendous success inside the Octagon over the last 12 months.

As the year winds to a close and we all start looking ahead to what 2022 may bring, I wanted to put together an advanced list of competitors to familiarize yourself with now and keep an eye on next year — The Dynamic Dozen for 2022, if you will — because I have a feeling several members of this collective will be championship contenders at some point in their UFC careers.

(Note: they’re listed in alphabetical order, not some kind of hierarchy; it’s just the easiest way to do things) 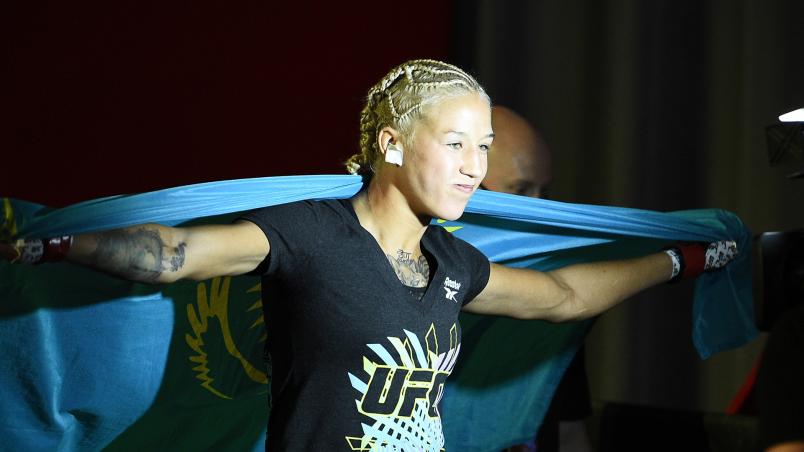 Mariya Agapova of Kazakhstan prepares to fight Shana Dobson in their flyweight fight during the UFC Fight Night event at UFC APEX on August 22, 2020 in Las Vegas, Nevada. (Photo by Chris Unger/Zuffa LLC)

Agapova made a positive impression on the UFC and prospect-watchers in her loss to Tracy Cortez on Dana White’s Contender Series in 2019, then went out and earned a pair of first-round stoppage victories under the Invicta FC banner to affirm her standing as one to watch in the flyweight division.

She made quick work of Hannah Cifers in her promotional debut in the spring of 2020, but when she returned two months later against Shana Dobson, Agapova emptied her gas tank early, faded hard, and got finished. In terms of betting odds, Dobson’s victory was one of the biggest upsets of all-time, and made just about everyone disembark the bandwagon of the prospect from Kazakhstan.

More than a year later, Agapova returned to the Octagon. She’d settled into life in South Florida, switched gyms, and learned from her past mistakes, collecting a third-round stoppage win over Sabina Mazo in a patient, measured effort that once again highlighted her abundant upside.

Still just 24 years old and already sporting a solid 10-2 record, don’t be surprised if the talented Agapova makes a move in the flyweight division over the next 12 months. 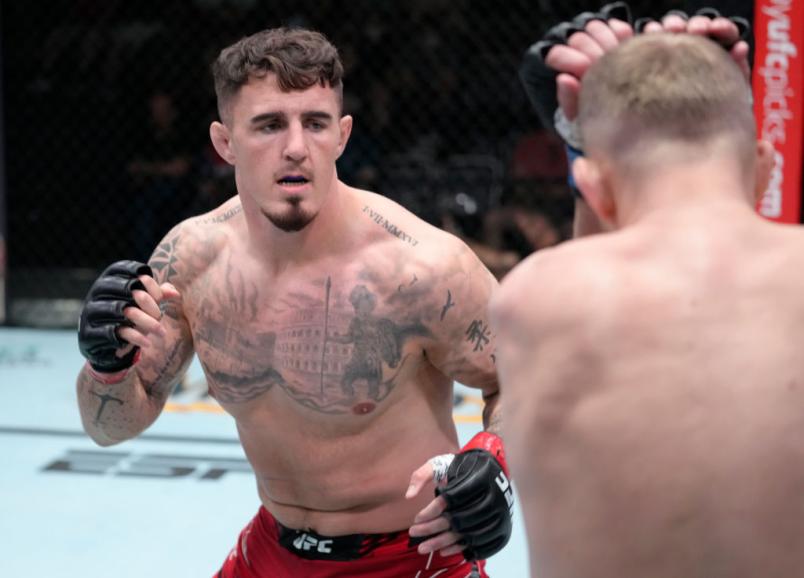 After a two-win rookie campaign in 2020, Aspinall added another two victories to his resume in his sophomore year on the UFC roster, collecting Performance of the Night bonuses for his second-round submission win over Andrei Arlovski in February and his first-round technical knockout finish of Serghei Spivac in September.

The 28-year-old Brit is the total package, brandishing crisp boxing and established power, and a Brazilian jiu jitsu black belt and deft submission game, as well as being a plus athlete with excellent movement and conditioning. He’s a big dude, standing six-foot-five and clocking in somewhere in the neighborhood of 250 pounds when he steps on the scale, but he doesn’t look like a 250-pound heavyweight, if that makes sense?

Currently stationed at No. 10 in the rankings, Aspinall feels like the heir to Ciryl Gane in terms of being the ascendant heavyweight everyone should keep close tabs on going forward. In 2021, France’s “Bon Gamin” earned three victories, capped by an interim title win over Derrick Lewis, and while forecasting Aspinall to claim gold might be asking too much, he has all the skills to put himself in the championship mix in the year ahead, and should be a part of the title picture for the next several years in the heavyweight ranks. 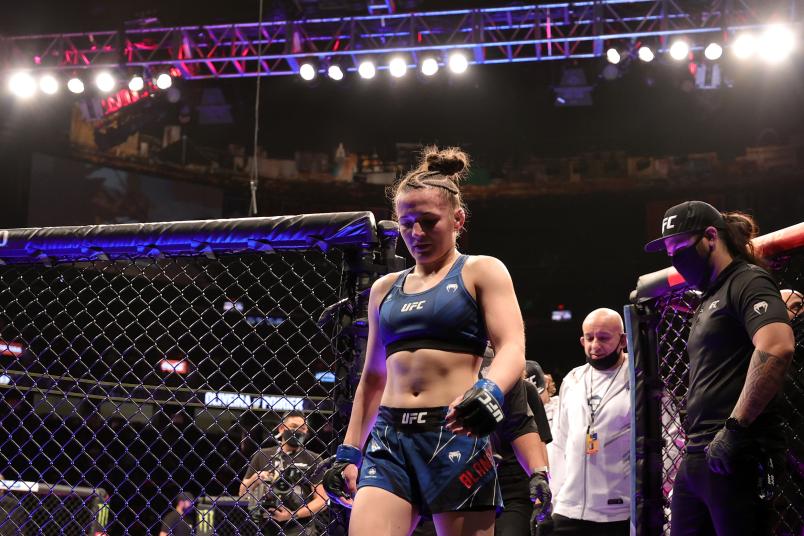 Erin Blanchfield exits the cage after her unanimous decision victory over Miranda Maverick in their women's flyweight fight during the UFC 269 event at T-Mobile Arena on December 11, 2021 in Las Vegas, Nevada. (Photo by Carmen Mandato/Getty Images)

On a night where Charles Oliveira cemented his standing atop the lightweight division, Julianna Peña shocked the world to claim the bantamweight title, and “Suga” Sean O’Malley showed he’s ready for a step up in competition, Blanchfield still managed to put forth the kind of performance that left people talking about her once the smoke cleared at UFC 269.

The 22-year-old flyweight strode into the Octagon and dominated Miranda Maverick, showcasing impressive strength and tremendous control in the clinch and on the ground en route to earning a clean sweep of the scorecards. It was one thing for Blanchfield to beat Sarah Alpar the way she did in her September debut, but few expected such a one-sided performance in her clash with Maverick, a rising star in her own rights, and the outcome put the New Jersey native on the radar for those looking for “The Next Big Thing” in the UFC.

I don’t want to sound hyperbolic, but Blanchfield is one of the best prospects to reach the UFC in quite some time.

She has a complete understanding of her strengths inside the cage and plays to them expertly, has a surprisingly impressive record for a 22-year-old, with eight wins in nine appearances, including an early victory over fellow UFC hopeful Kay Hansen. Her lone setback is a debatable split decision loss to Contender Series grad Tracy Cortez, who followed that win with her victory over Agapova before adding three wins in as many starts inside the Octagon.

She’s gotten demonstratively better since that contest and yet still has tons of room to grow as a fighter, profiling as someone that could be a contender in the 125-pound weight class for a considerable amount of time, starting as soon as next year.

Blanchfield is the goods, and you need to pay attention to her. 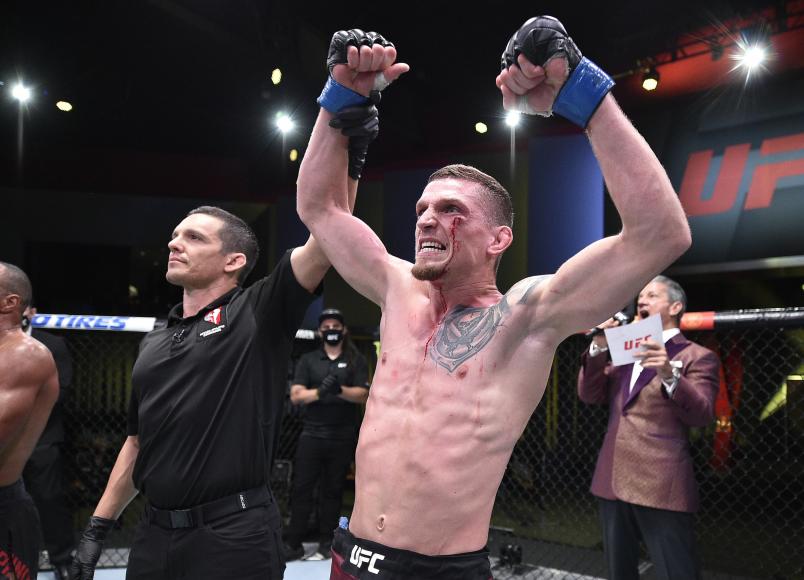 David Dvorak of the Czech Republic reacts after his victory over Jordan Espinosa in their flyweight bout during the UFC Fight Night event at UFC APEX on September 19, 2020 in Las Vegas, Nevada. (Photo by Chris Unger/Zuffa LLC)

If you’re looking for a dark horse contender in the flyweight division, Dvorak is your man.

“The Undertaker” is 3-0 in the UFC, 20-3 overall, and riding a 16-fight winning streak overall. The 29-year-old Czech standout began his UFC run with a unanimous decision victory over Bruno Silva, who had a major bounce-back year in 2021, followed it up with a similar result opposite Jordan Espinosa, and then secured a first-round submission win over Juancamilo Ronderos in his lone appearance of the year.

Dvorak was originally scheduled to face Raulian Paiva in May, but the Brazilian withdrew the day before the bout due to health issues brought on by his weight cut, prompting his move to bantamweight. While the Brazilian moved up to bantamweight, scored a win over Kyler Philips, and landed opposite Sean O’Malley in a high-profile pairing at UFC 269, Dvorak rolled into the high-risk, no-reward pairing with Ronderos and handled his business in impressive fashion.

He’s ranked 10th in the division at the moment and should find himself sharing the Octagon with someone positioned ahead of him in the pecking order in his first appearance of 2021. A victory there would put him in the title conversation and everything we’ve seen from him thus far suggests he has the goods to hang with the 125-pound elites. 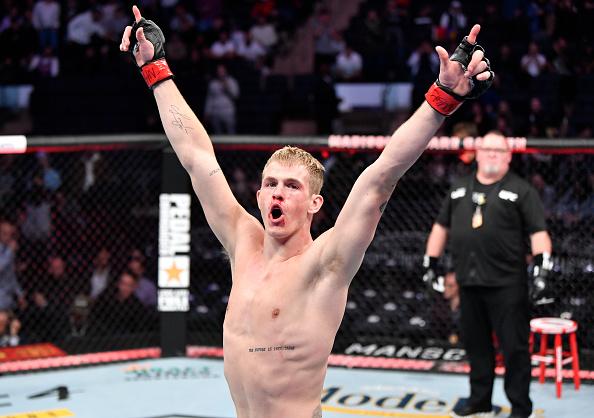 Ian Garry of Ireland reacts after his knockout over Jordan Williams in their welterweight fight during the UFC 268 event at Madison Square Garden on November 06 2021 in New York City. (Photo by Jeff Bottari/Zuffa LLC)

One of the most hyped new arrivals to the UFC in 2021 was Ireland’s Ian Garry, the 24-year-old unbeaten welterweight with designs on being the generational successor to Conor McGregor.

After claiming the Cage Warriors welterweight strap in June to push his record to 7-0, Garry signed with the UFC, relocated to South Florida to train at Sanford MMA, and debuted at Madison Square Garden as part of the UFC 268 prelims. While the opening round of his fight with Jordan Williams was closer than most anticipated, Garry showed why he carried a ton of hype by stopping the Contender Series graduate in the final seconds of the frame, connecting with a step-off right hand that dropped Williams right before the horn.

Now 8-0 as a professional and boasting an incredible frame for the welterweight division, Garry looks the part of a future star, and it’s difficult to argue with the results thus far.

Competing in the UFC welterweight division brings myriad challenges and very few can sail those waters without encountering rough seas at some point. But Garry is surrounded by an excellent team, understands his current place in the ecosystem, and has the drive and focus to do whatever it takes to make his championship dreams a reality.

Carrying the nickname “The Future” is a daunting task that courts criticism and doubt, but the talented Irishman seems up to the challenge. 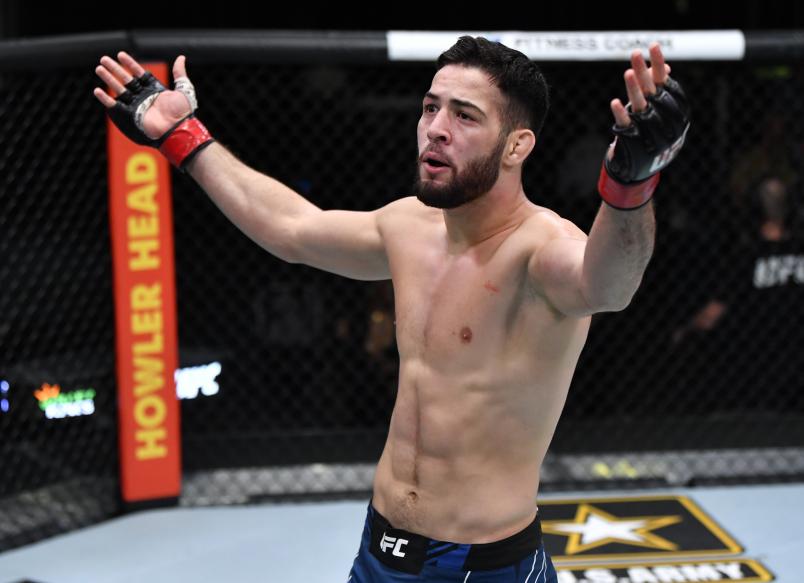 Nassourdine Imavov of Russia reacts after his victory over Ian Heinisch in their middleweight fight during the UFC Fight Night event at UFC APEX on July 24 2021 in Las Vegas Nevada. (Photo by Jeff Bottari/Zuffa LLC)

One of the stars of the second half of 2021, Imavov’s year actually started with a setback, as he dropped a majority decision to fellow middleweight hopeful Phil Hawes in February.

Five months later, the 25-year-old returned to action in a clash with Ian Heinisch, announcing his presence with a second-round stoppage victory over “The Hurricane.” Then in November, Imavov ventured to New York City, delivering another blistering effort while collecting a second straight second-round finish in his showdown with Edmen Shahbazyan at UFC 269.

Now 11-3 for his career, Imavov heads into 2022 as the top emerging talent in the 185-pound weight class. He’s the lone fighter currently ranked in the Top 15 under the age of 28 and made major strides between his narrow loss to Hawes and his dominant effort against Shahbazyan.

Training at the MMA Factory in Paris alongside interim heavyweight champ Ciryl Gane under the watchful eye of Fernand Lopez, “The Russian Sniper” is an intriguing talent to follow heading into next year as he looks to continue his climb up the divisional ladder.